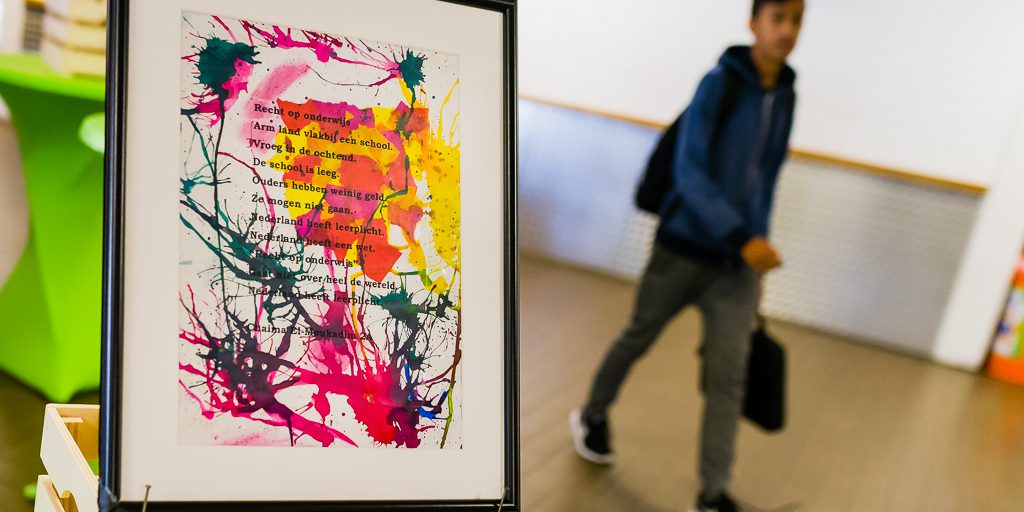 Also in English at the end 🙂 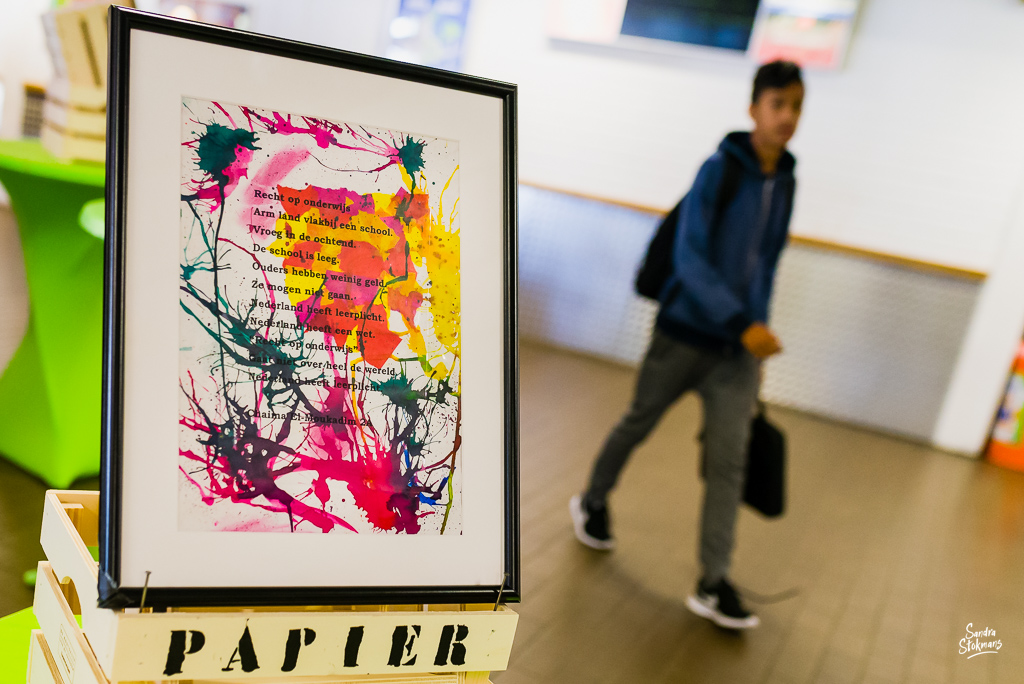 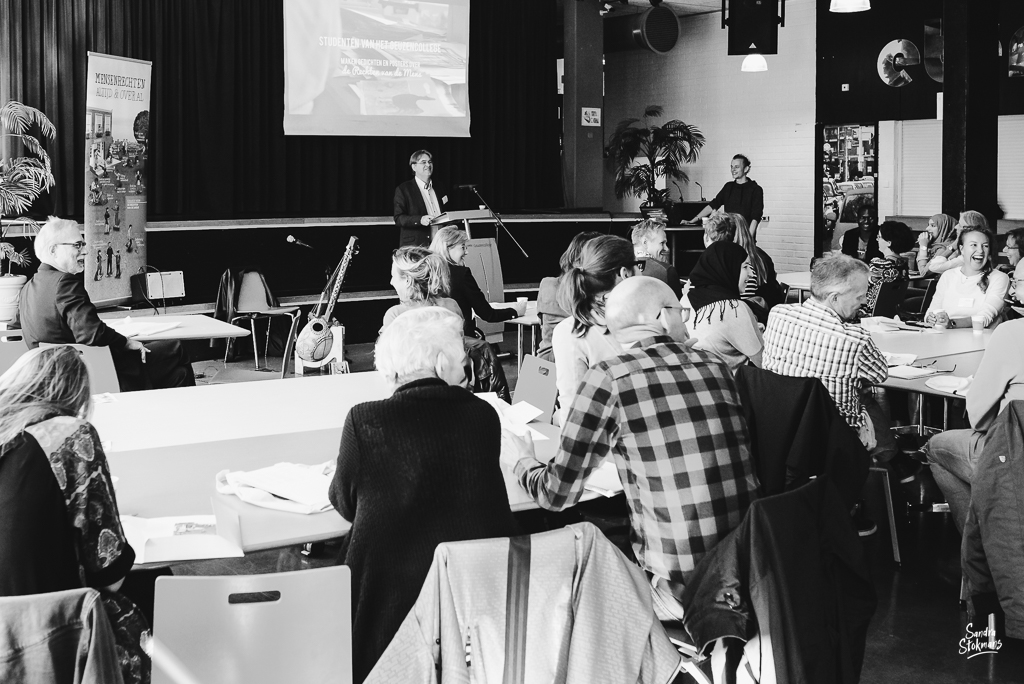 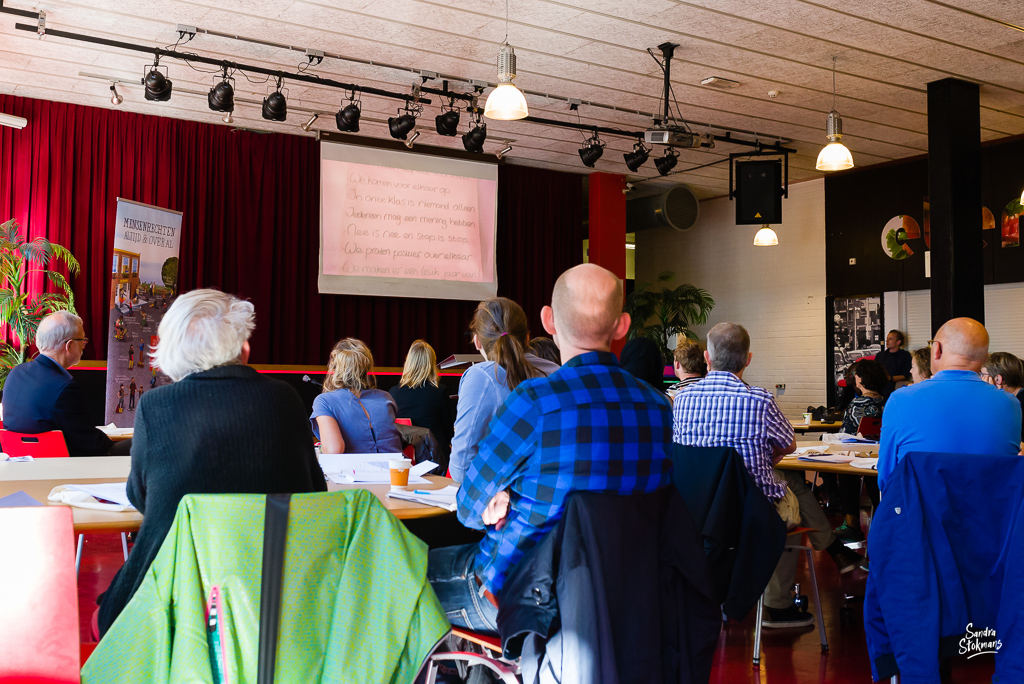 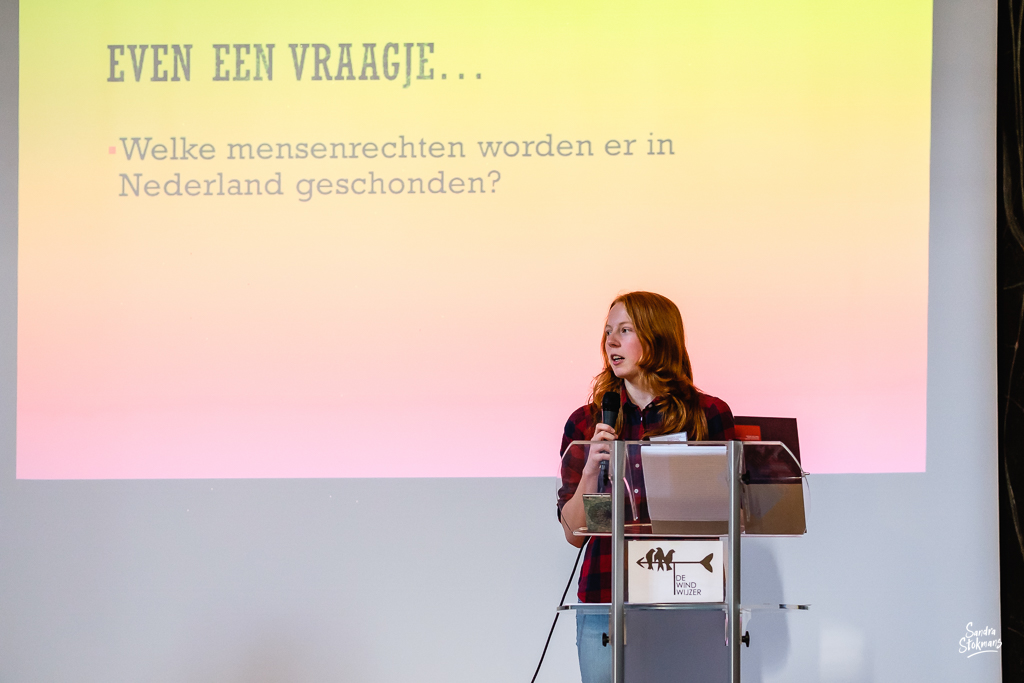 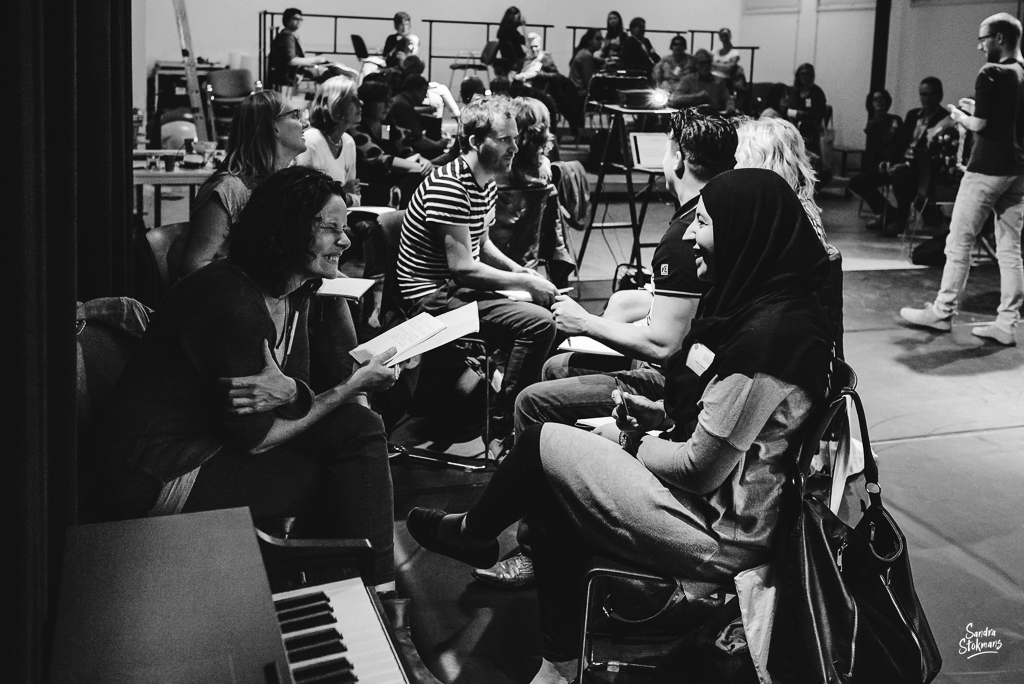 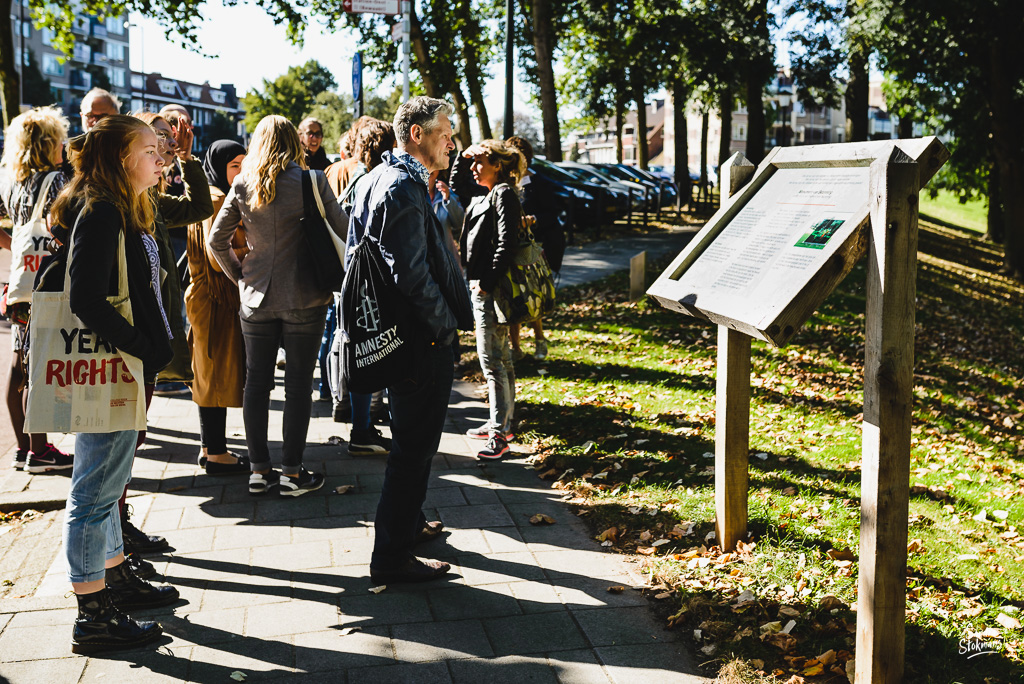 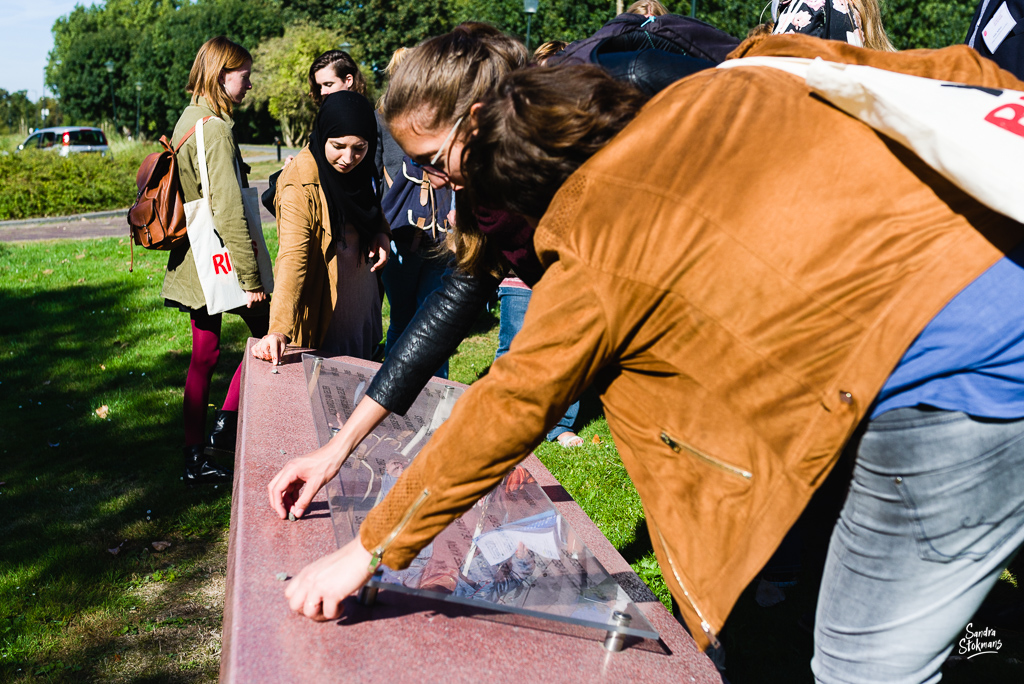 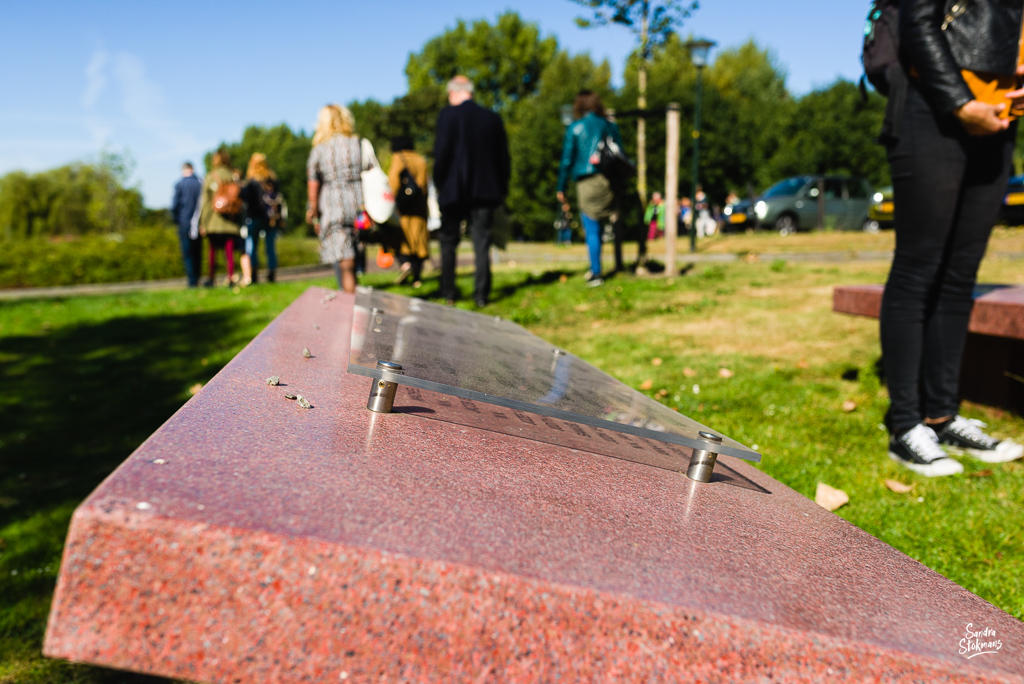 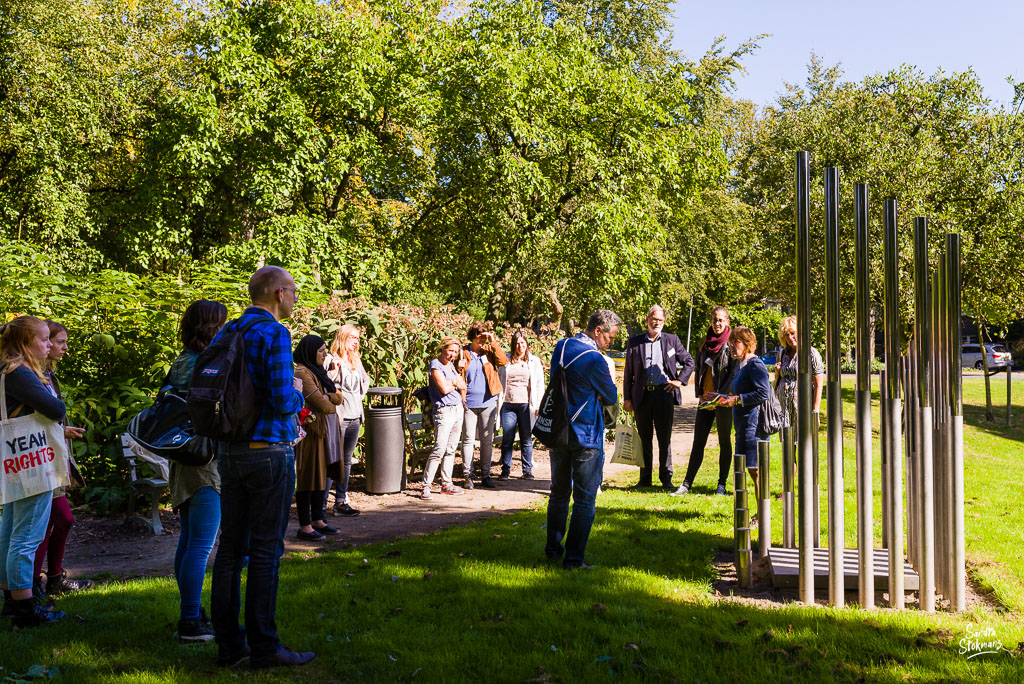 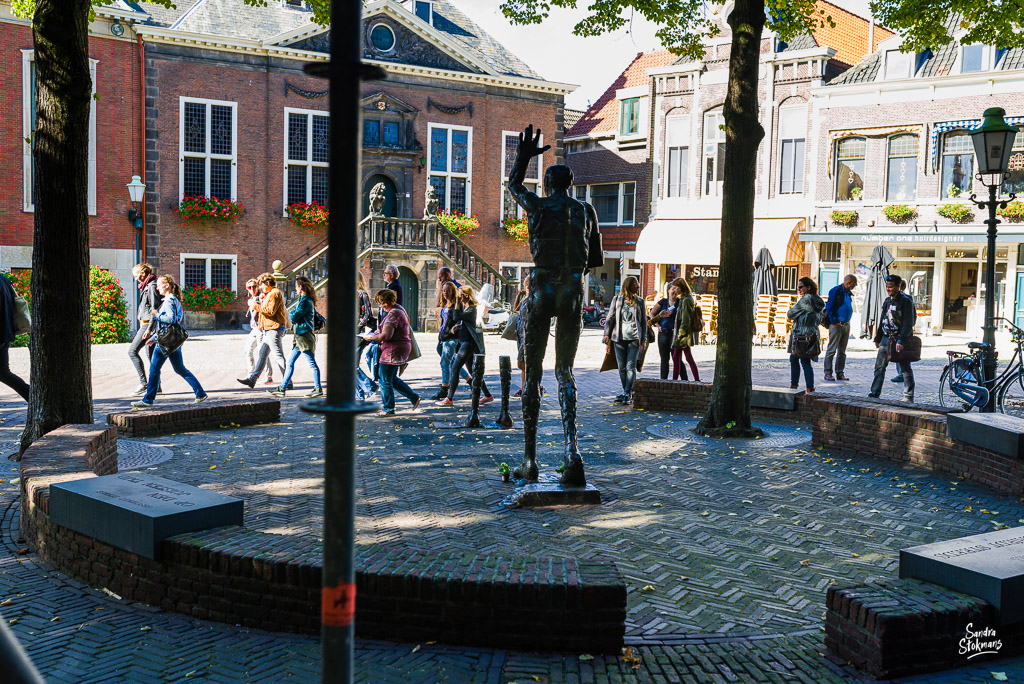 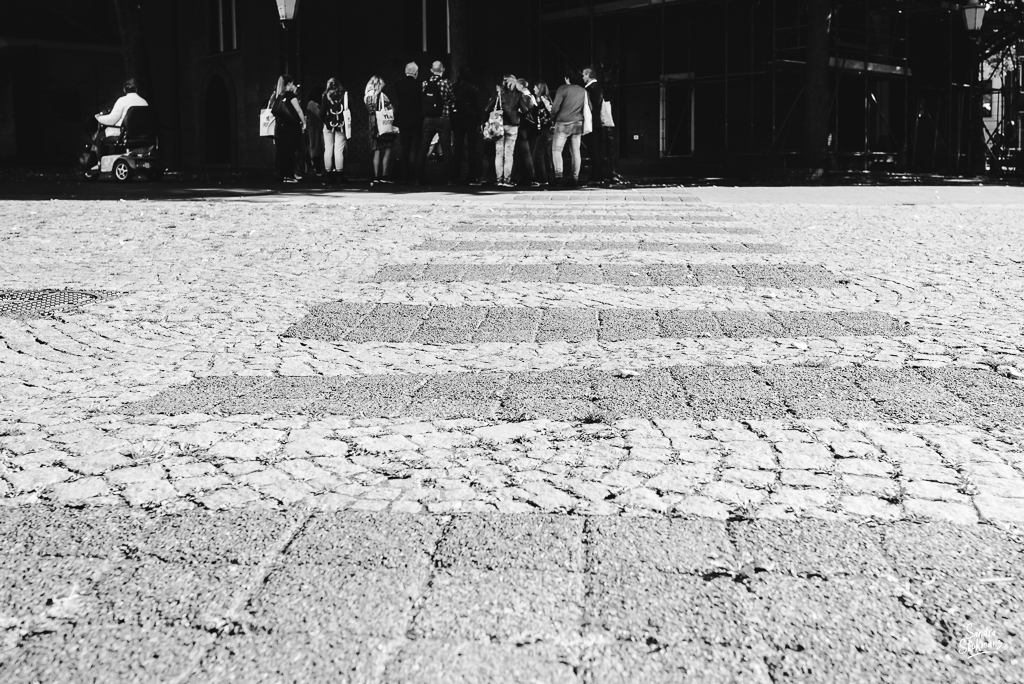 Event photography of an inspiring day on human rights

Rights, human rights, are for everyone. So much was made clear during the meeting “Human rights in movement” of the College voor de Rechten van de Mens that photographed. It was a day in which the exchange of information and experience, and the ‘Liberties walk’, a stroll through Vlaardingen, stood central. Wonderful ingredients for some beautiful pictures.

If I’m asked to photograph for an organization or company I prepare myself. I ask what kind of meeting or event it is I’m photographing. I look online what kind of organization or company I will be working for. I do this because I believe that in addition to reliving the moment a client should be able to use the pictures multiple times so that they extend the investment of the photos. Pictures are worth it!

I made the first picture (shown above) very consciously. I saw the poem of those ominous words “right to education …” and the theme of the meeting was “Human Rights in Motion” and it was a day organized for teachers to give them tools and inspiration to be able to discuss human rights in their classroom. So considering all this, I was ready to take a picture with movement, with a student or several students. And when this boy walked past I took the photo. Focussing on the poem with the movement behind it. A story in one photograph. This picture, for me, has become a symbol for the whole day. And the loose shoelace was the icing on the cake :)!

The picture reportage from an inspiring day

The movie with the pictures (see above).

The participants at this meeting discussed the human rights temperature in their own school, how are human rights incorporated into the school policy, relationships, curriculum and school climate.

After a brief introduction from the general manager of the Geuzencollege and the Vice-Chairman of the Board for the Protection of Human Rights, the meeting was opened by the New Dutch Connections in a, for Dutch people, very special kind of presentation. At first everyone had to lose up a bit and so they danced. Yep! One person began dancing and figuratively gave baton to another. And to my surprise, everyone got into it!

In their own words the Dutch Foundation New Connections (NDC) use theater, art and training to inspire people and motivate them to become active in our multicultural and multireligious society so that the foreigner is not a stranger any longer and refugees can come home. Founder Bright Richards fleed the war in Liberia and arrived in the Netherlands in 1991. He went to the academy of dramatic arts in Arnhem and he played in various theatre companies.

New Dutch Connections inspires and motivates young asylum seekers to once again believe in themselves and to involve others in realization of their dreams for the future.

After the lively opening of the meeting “Human rights in movement” of the College van de Rechten van de Mens, Bright asked someone to borrow him 50 euros. That was kind of a strange request. But someone gave him the 50 euros. Then he spat at and crumpled up and trampled on the 50 euros, which is worth a lot for a lot of people. You could literally hear that everyone help their breath. What was he doing?! And then Bright “went loose” in a very unique way.

Of course I was busy taking pictures so I didn’t hear the whole story but the bottom line was that this is a metaphor for how many refugees feel. 50 euros spit, crumpled and trampled on remains 50 euro, and is worth something. He tells this to young asylum seekers in the Netherlands. Sometimes it is difficult because of what happened or happened to you to continue seeing the human being. I must say that it is really worth seeing and listening to Bright speak.

The second movie is a very special movie where you see the students of the Geuzencollege make drawings/artwork and hear them read from their own poems. All made for the ‘Liberties walk’.

While walking the participants talked to each other about our liberties and rights and all the dilemmas that come with it. There was a guide who made sure the process went according to plan. During the freedoms walk one walks from monument to building and from park to street. Gradually you become more and more aware of the human rights and our liberties. From time tot time questions were asked and / or poems were read made by the students of the Geuzencollege themselves especially for the Liberties walk. A special kind of education which was very inspiring to the teachers present.

With two groups we traveled by train to Vlaardingen Oost (east) where the walk began. The walk also ended in Vlaardingen Oost, so we could travel back again to the Geuzencollege (by train). During the walk we stopped twice for a workshop.

The third movie is a movie about human rights in education.

Wow the young ladies and young man were very well-spoken for their age. I was truly very impressed! They shared how they brought human rights into the limelight at their school by organizing a ‘Morning of Human Rights “.

Workshop 2: Human rights in the classroom, by Professor F. Kusters of Wolfert Colllege

Frans Kusters of Wolfert College in Rotterdam is a philosophy teacher who designed some materials on human rights and practiced them with his students. He worked with his students on the question “Is happiness a human right?”. The workshop itself began with an exercise of silence and then each participant had to look about three minutes in another participants eyes. Some experienced it as being very oppressive and others were fine with the exercise. And then there was a discussion on how could you talk about human rights in the classroom.

Unfortunately I wasn’t able to hear and remember all of the information taking into account that I’m really busy photographing.  Working the whole time and thinking “how can I bring this moment into a frame as beautiful and expressive as possible. As a story or a few images that make a story. With movement and / or an emotion”. So I do remember the blonde girl from the CSW Van de Perre school making a comment for reflection that really impressed me. At the moment I thought “I must remember this” and unfortunately I can’t recall what she said. If a participant reads this and remembers what she said I would really appreciate you sharing this in the comments :)!

And after the second workshop we went back by train to the Geuzencollege where the day was wrapped up. The College summarized the day and gave an incentive to ‘what now’, Amnesty and Movies that Matter shared some teaching materials for the teachers present and there was a drink. The last made and served by the students of the Geuzencollege itself.

Some highlights for me from this event

Daniël van Cotthem was a 17-year-old boy to Vlaardingen who was killed by senseless violence in 2000. He had brought his girlfriend to the train and was beaten to death by a group of troublemakers. The monument Rini Hurkmans shows young people as a bouquet of flowers and refers to the flowers which are often deposited in the place where senseless violence happened.

I wanted the group, the monument and the explanations all to be in the frame. That could only be done when I stood behind the group and the image would be kind of ‘flat’. I wanted to grab a quiet moment as a juxtaposition of the hustle and bustle of a group because of what the explantation of the monument stated ‘it was a monument of reflection’. When the girls were standing there I had the moment I wanted (see image above).

A very important right is the right o inviolability of the person. You have a right to decides what happens to you and your body.

This photo is of the Jewish cemetery in memory of the small Jewish community that lived in Vlaardingen. It is an old Jewish custom to place a pebble on one of the tombstones when entering the cemetery.

With the picture above I wanted to combine the cemetery and the laying tof the pebbels with the movement of the group (being the titel of this special meeting).

When we stood by this monument that human rights apply to everyone, whoever you are and wherever you are. And a poem was recited, a poem made by a student of the Geuzencollege.

During the day I really payed attention to the movement of the group, or just the opposite, given the theme of the meeting “Human rights in movement” and the liberties walk we were walking.

Above were two moments when I felt that the group beautifully symbolized both the movement and the non-movement. And to keep the image as pure as possible without distraction, and because there is enough contrast in it, I converted the images into black and white.

This monument designed by two artists from Vlaardingen (Joop van Dorp and Cor Maarleveld) symbolizes prison bars with an opening which is the hope that Amnesty International brings. Because of Amnesty’s actions prisoners of conscience get a little light in the darkness. That’s why we put down a couple of lights.

With the photos above I wanted to visualize (a part of the monument), the person and the putting down of the light (movement). The light and shade worked great as well.

This monument stands on a very beautiful picturesque square. It recalls the Dutch resistance group during the Second World War. Former Geuzen and survivors created the Geuzenpenning to be awarded to those people and organizations that fight for democracy and against dictatorship, racism and discrimination. Amnesty presented the first Geuzen Medal in 1987.

Home
The doorbel rang
I was taken from my room
They put me out of house
They said I did not belong here
They do not know what happened in my country.
Think, what is happening in my life
where I come from
I wish I could explain …
I get scared thinking: the doorbell, my room out, my house out
Trapped, evicted from the country
-Esmee Sauce

With the photos above I wanted to fit the monument with the group and the movement in the frame. In the first image they walk away with the same kind of motion as the Geuzen Monument itself and I like the fact that it kind of looks like the monument is waving and saying goodbye. And in the second image the “Geuzen steps” give direction and the gentleman in the wheelchair gives the picture just a little extra.